At this point in workstation technology, the capabilities at the desk are astonishing. Components from the likes of AMD, Intel & NVIDIA are revolutionizing desktop computing. At Proline we are on a mission to deliver unrivaled high performance without forfeiting the system's overall reliability. 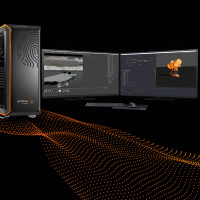 Imagine a system that could demolish heavy compute and parallel workloads whilst boasting extreme graphics performance made possible with NVIDIA's incredible GeForce RTX and Quadro RTX series GPUs, built on the Ampere architecture.

This system is the newest addition to our range of high-performance industry-specific workstations. Sitting at the top of our range the PL Ultimate PRO features the latest & highest quality components from AMD and NVIDIA which combined create a workstation capable of astonishing processing power.

NVIDIA's RTX Series GPUs have been engineered to accelerate any professional’s workflow. Due to the staggering 128 lanes of PCIe Gen4 available on Threadripper PRO, we can get full bandwidth and performance from the quad NVIDIA GPUs.

Designed to deliver unrivaled rendering capabilities the Ultimate PRO sits under your desk in a sleek case, which has been engineered to be quiet as you work.

This system is the perfect match for post-production workflows. Aspect Film & Video are a video production company based in Bristol and London. They have been using the Proline Workstation to deliver a number of VFX projects, including a TV commercial for a national F&B brand, an innovative WebGL project for an international charity, and proof of concept piece for a Feature Film. As a result, the team saw much faster and more reliable processing; production efficiency has taken a major leap forward. The team are able to hit deadlines faster because render times with Proline are now 25% (x4) of what the production team previously planned for.

Are you ready to transform your workflow?