Discover why we used AMD’s Ryzen™ Threadripper™ PRO as our CPU of choice, we highlight some great facts and discuss what the CPU brings to the table. 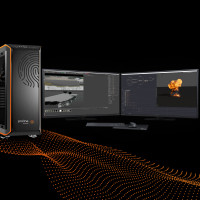 So why did we choose AMD Ryzen™ Threadripper™ PRO Processors as our CPU of choice in our workstations?

AMD™ has been leading the way in processing technology for over a decade; it’s reliable, powerful, and a well-known product.

We fully appreciate that time is always of the essence when creating graphical content, when much of the time is spent waiting for animated graphics to render. For example, a single frame from the film Luca (a Pixar film released in June 2021) sometimes took anywhere between an hour to eight hours to simply render. Again, we would like to highlight that animation is a time-consuming and very CPU-intensive process. Just to put this into perspective, that is just rendering 1 frame from an average of 24 frames in that one second, and that is using large render farms (costing millions) which only a few companies have access to.

This is where high-end desktop processors, such as the AMD Ryzen™ Threadripper™ PRO Processors fit in.

As 2022 is just round the corner, new techniques are always being published, and due to the higher demands of these methods, multithreaded CPUs are a must. Generative Design is such a software, which leverages AI to build optimised designs under specific parameters. The process is very CPU dependent and benefits hugely from the use of multiple threads just like the AMD Ryzen™ Threadripper™ PRO Processors offers.

Five Facts You May Not Know About AMD’s Threadripper™

1. It's the most powerful processor TechRadar has ever tested

The Threadripper™ is a performance beast; it is designed to make light of 3D rendering, streaming, CAD work and more. TechRadar (a major online global technology news publisher) called it “the most powerful processor we've ever tested”.

One single AMD Ryzen™ Threadripper™ PRO Processor is up to 43% faster than two top of the range Processors (worth $20,000). Red Digital Cinema implements these powerful processors into their 8K video editing workflow.

When it was initially released, they were the first processors that supported PCIe 4.0 as a standard. For those unfamiliar, it is the latest interface that connects the best graphics card and sound card to the motherboard.

Yes, Ryzen means freedom; the CPU comes unlocked, which means users can push their hardware further. AMD’s ethos is to ensure users have the freedom to customize and play with their system as they wish.

5. AMD’s Ryzen™ Threadripper™ PRO is the most powerful desktop processor

Our PL Ultimate PRO Workstation utilizes the AMD Ryzen™ Threadripper™ PRO Processors, which is well-known for obliterating its competitor (the Intel HEDT), destroying CPU Benchmarks and topping rankings for the BEST CPU for Workstations in one go.

Our workstations are built with purpose. High-performance workstations based on absolute flexibility and uncompromising utility. Designed from the inside out, Proline workstations remove the barriers so you can do your greatest work.

Check our range out here, or if you’d like to find out more simply contact us here!